According to the rules for Player Conduct, it includes the following lines:

· It is not allowed to excessively insult, troll, swear, or send spam.
· There is a zero-tolerance policy for any form of discrimination or harassment.

After a couple of hours between considering whether it is fairer to report this or block, or just leave it, I decided to report it. It was in public discord chat, not private. It started because I challenged him on putting words into people’s mouth.

In which case, I was told to ask him myself, with Doodle putting a bet later confirmed to also double as an insult. 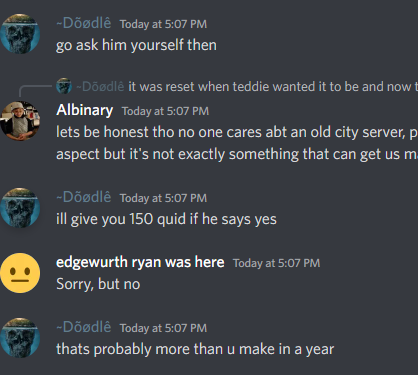 I had responded telling him I did not appreciate it, but I wouldn’t block him simply as I felt like it would make me seem weaker than I actually are, blocking someone over something petty. I normally block people if they spam me in private chat, not public. Blocking wouldn’t have an effect anyway, for all I know - I could be insulted behind my back. 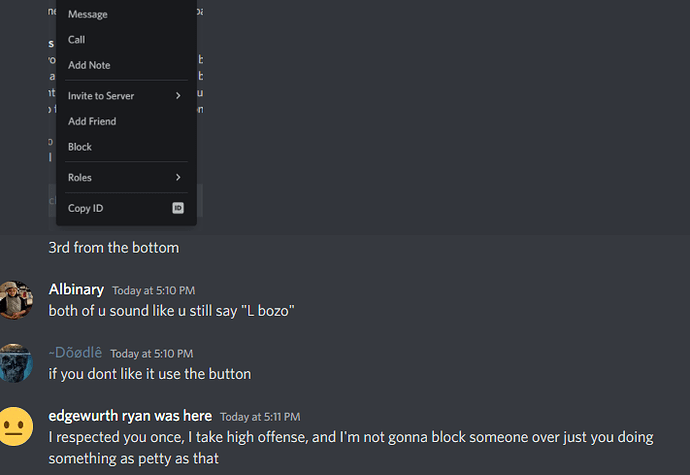 He had asked what the problem was, and I responded as bluntly honestly, being done with all the bullshit and trying to be as placid as I possibly could without being rude. I felt like I had no choice in the matter other than to say the honest truth.

Later on, when Cake challenged me thinking what Doodle said was a joke, and was corrected by Doodle saying it was an insult, he agreed that it was a dickhead move, and Doodle proceeded to insult me with Cake… I don’t even want to describe how this defense was and even backed me up. 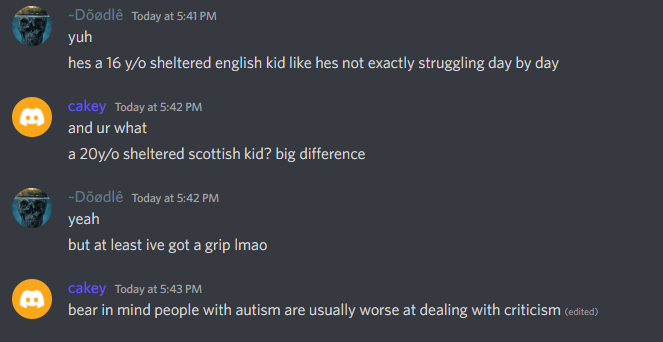 The rest of the discussion/argument/attacks (delete till preferred result) was really confusing for me, since I do not know whether this can be considered related or not since I’m so lost now. I’m still going to attach the rest of the major parts since… well it’s a important section. 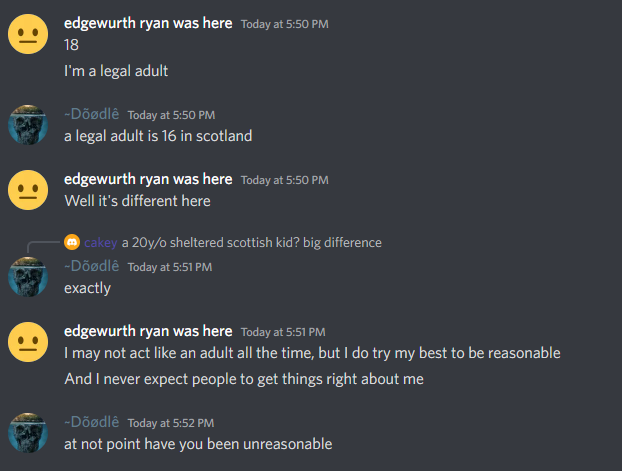 The argument starts at this link, however I won’t be suprised if it doesn’t last/stay on his end.

I don’t regret what I said about this, it was indeed a dickish move, and quite frankly I was once again sick of this bullshit and unneeded responses.

As you mentioned, you chose the engage in an existing heated discussion about a sensitive topic that has divided the community. You also engaged in the conversation with me 13 more times when you had the option to leave, or block me (as highlighted in ref. 6) if you felt uncomfortable in this predicament. Being insulted twice does not constitute harassment especially when you chose to continue to provoke the discussion and not take action, it’s a double edged blade.

I am sorry you feel insulted, and I apologise.

I’m sorry, but I really don’t think your apology is something I can take. I had already forgiven you for your previous discrimination, this has proved you’ve not changed, and you’ve also send a message no less than a week ago.

That’s ok, you don’t need to accept anything. I’m confused though I don’t remember ever discriminating against anyone?

Clarification: The whole thing did not start from an discussion I could’ve left. It was happy progressing until I had asked if this was genuinely something Tedde said, since I don’t think it would be very likely Tedde would mind what happened to HelloMiners, as long as it was reasonably run. So I had asked if Tedde had actually said he’s against a reset, to which Doodle said he didn’t know, and I basically said that it’s not a valid point since we don’t actually know Tedde’s opinion. This whole thing stemmed from Doodle, I had no major presence in starting the incident, what my response could have been worded better, but the insults were not needed. That’s the focus of this report.

I had attempted, as I said, to remain calm, collected and cool-mannered. Everyone has a point where they run out of patience, and I had run out.

I loosely (could be an opinionated discrimination) count the ‘sheltered’ part as discrimination, as he both has no knowledge of my background and life. Not all Autistic people have been sheltered. I’ve been far from sheltered, in fact I’m mostly independent now. I was not 5 years ago, when I first started playing HelloMiners, so he’s probably thinking of back then.

The insult in question is obvious.

I don’t think where the discussion of a server reset really started from is relevant given it was neither of us that started it. That being said, my point was that you actively engaged in the discussion before, during and after your screenshots and didn’t take any countermeasures to remove yourself from the discussion if you felt uncomfortable. Furthermore, your screenshot of TOROMBOO and I was from yesterday, before the discussion? I don’t think that you have applied the context that the message was in respondence to. I said that you probably don’t make 150 pounds in a year and said you were sheltered (like most people who can spend hours arguing online probably are) and I really am struggling to see how this constitutes as discrimination or harassment.

I’d also like to mention that discrimination is by definition, the unjust or prejudicial treatment of different categories of people, and if you believe being called sheltered is discriminatory, I’d like to point out cake also called me sheltered.

To further clarify, I didn’t know you had autism until about an hour ago.

None of this excuses what was said but I’d like to take the time to clarify details that have been brushed over to suit the narrative.

Admin team will be reviewing this in the coming week, please allow time to go through evidence.