This was resolved yesterday already, and the person in question’s unban request denied. Despite it being technically resolved, I decided to think on it before I decided to make it public, after reporting privately for a first-response reason. If this is the wrong place, then apologies - I just decided to hold of an public ‘evidence’ showing (i.e I was the only one harassed that I know of), and to give my point of view on the matter, whilst staying more professional than I would have yesterday - and also give an full, comprehensive evidence set which I initally sent privately. I have no evidence from other people, but I feel like it’s right to do this after privately reporting it - so people are aware that the unban denial is fair.

11th May 2021, sometime between 3:30 GMT+1 and 4:00 GMT+1, I was added to a group chat. Normally, I don’t mind this unless it has a purpose. I feel this was not related so I’m not documenting evidence - I saw it was just for shitposting, so I told them not to add me back because I don’t want to be randomly added to groups which hold no purpose for me, as normally if I want to interact like that, I use a discord server.

A bit later, I started getting direct messages on Discord from two of the members of the group chat - Jorbby and FazeColin. 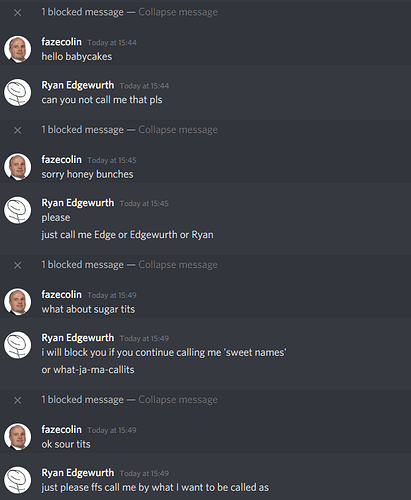 I asked him several to not call me that, however the fact that 2 other people were trying to add me as friends on Discord, and the fact that Jorbby was doing the same thing, at the same time led me to believe that this was an orchestrated harrassment, or are the same people. I politely told him several times to stop calling me what I’ve called ‘sweetnames’ here. He refused so I blocked him before I put two-and-two together and reported to a staff member in direct messages to try to resolve the issue quickly, and ask for advice. 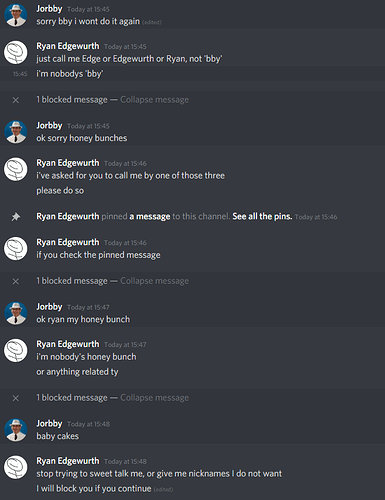 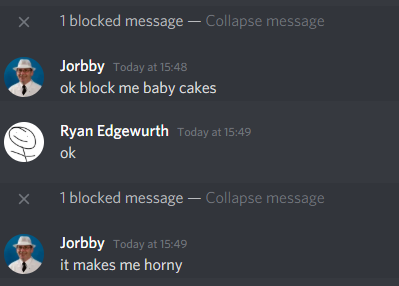 The reason for waiting nearly 12 hours to make this post after direct messaging an moderator about this is so people can be made aware of the situation, and try to get all the facts and information that I know of, and also as a public dump of evidence warranting Cheerios32’s denial of FazeColin’s unban.

The Ban Appeal for FazeColin

This was mostly so there’s evidence in the public for it - if you read the post.

I had reported it previously, and thier unban appeal was denied because of it.

I’ve sent it out so the public can see and not have an outcry.

innit whys my appeal been denied then

It’s still very clear evidence that chicken/whatever name they’re using at the time cannot be trusted around the community, even now: this makes it more than enough to deny the appeal.

I mean sure, but I was just pointing out that it isn’t against the rules.

even though im banned, i’m still around the community on discord,. Even if im not in the server, i have dozens of players added as friends on discord.

If I wanted to IP log or harass the players of this server, I can regardless on weather or not you unban me.

That sounded like a threat, and my point still stands regardless: just because you’re around a large amount of players, doesn’t make it fine to harass a small number of people.

You realize they can just block you right? Funny man

yeh and they can in game as well