1.19
It’s finally official! We have skipped versions, on time and on budget (for a change). The server is now up-to-date with Minecraft and is running the latest release version of the game.

Bringing with it all new features such as froglights, skulk and the long anticipated warden! Although the new mangrove swamp biomes are not available in our main overworld, you can farm their resources through the resource world!

This update has been in the works since December of 2021 by myself and most of the stuff was intended to launch with the 1.18 update. However, we decided it would be best to incorporate as much as possible into the 1.19 update to keep things cohesive.

As everyone knows we have just recently had a 20+ day downtime due to some server issues however I am pleased to say the server is now fixed and there is no rollback for the map or inventories.

We will be giving all players roughly 10 days premium from the day the server opens, to compensate for the downtime.

Shrines:
Shrines is probably one of the largest features of this update. For the past few months we have been hard at work recoding and designing mobs in denizen. On top of this, all the past shrines have returned with the addition of two new shrines, the hive and the submerged deep.

Similar to the daily/weekly/monthly model the other venders use, the Head Hunters Guild will have you rushing to certain shrines to receive a certain drop, or defeat a number of mobs but don’t die! You could loose your bounty! This adds a whole new roleplay job for players to participate in! As for the reputation token rewards, more are planned to be added for all jobs in the future, however a rare sword, along with unknown tokens and forgotten tokens have been added.

This being said, players have voted twice on delaying both dungeons return in favor of other features in this topic. I plan on doing a xmas event again this year, and halloween has taken a huge chunk of my time this fall. To get the Unknown Island and Forgotten Temple open once again, I need to design 3-4 bosses for the Unknown Island, along with a brand new item set, and create more islands to expand the dungeon to a larger size. As for the Forgotten Temple, the dungeon will remain the same size, so 4 new bosses need to be made for this dungeon.

Making the bosses wont be too hard, but creating the skills for the bosses will be time consuming as well as the item sets. Expect dungeons to return in the next major update. Possibly for the xmas update topic.

Though fishing has been a smash hit with some players, it may be feature lacking for some. I originally wanted to add this feature to go with the previous update however with other priories taking my attention, I have re-added this feature. If you choose, you may now access a new GUI through the Fish Shop NPC at Bernies Cottage! If you wish to maximize your profit, or scratch that gambling itch, you can now weigh your fish through this menu, to hopefully get a higher payout. Just simply put the fish in, click the anvil, and the weight will be stated on the fish’s stats. You may now sell it to the same npc, by clicking on the right side, and selling it as normal. This is not a requirement, you can still sell fish for the same price as before the update, just by clicking on the right and selling from there.

Oh, Did I notice that Submarines are a thing now? You can get one from the Fishing Reputation Shop, or if you’re rich enough, you can get a fancy Amethyst Sub from the secret Monopoly Hideout… More on that later!

Though adding maps is not our top priority I want to try and add some every now and then to keep players interested, we have added a grand total of 5 new parkour maps for you to enjoy! You will receive F500 for completing each of them! You can check out the new parkour maps by doing /pa lobby or accessing the area through the Event Hub.

Though leaderboard times are competitive we want to refresh it every now and then. Below is a list of the top five players in each parkour map. Players will be awarded a cash bonus for how they place, We plan on doing this wipe every 3-6 months to keep it fair, however that can change in the future:

Players who competed in the parkour leaderboards below will be paid the following. Going forward those who use shortcuts can be disqualified in future payouts.
1st: 5000F per map
2nd: 2500F per map
3rd: 1000F per map
4-5th: 500F per map 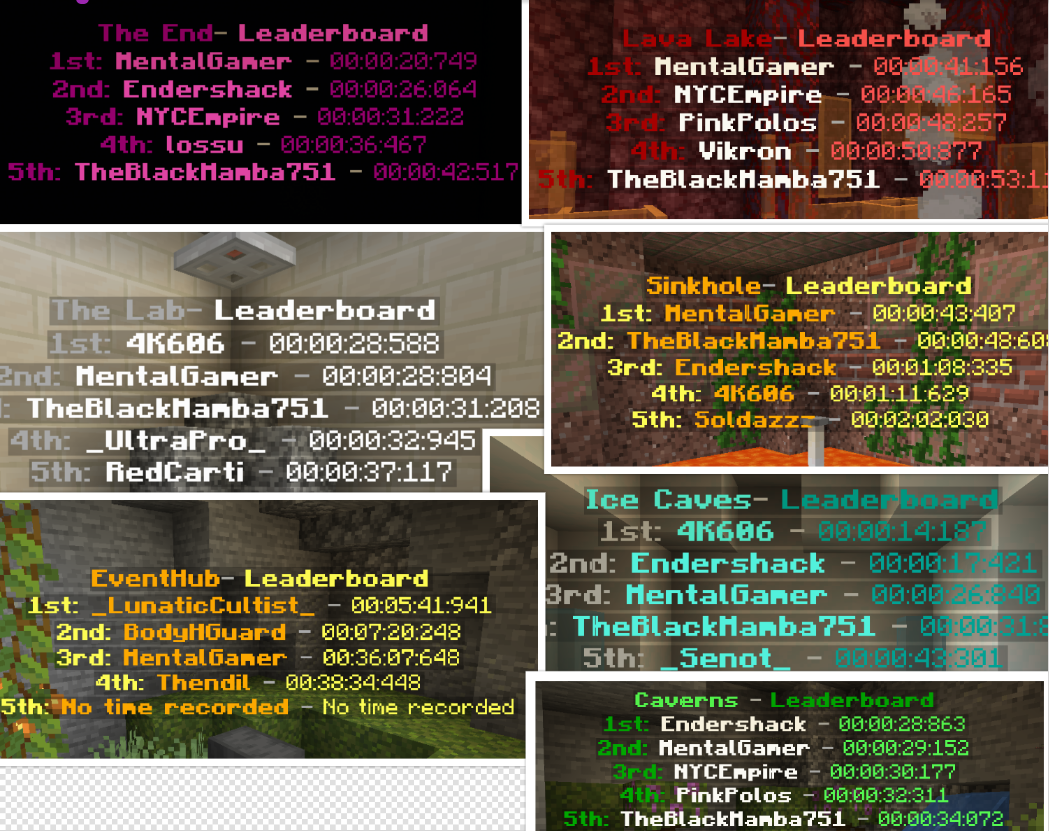 I really wanted to do a full look into how Roleplay Jobs however Shrines took me way longer than I expected it to take. I spent around 3 months getting shrines to a point where I’m happy with them, and with Cheers help the spawner system is working under denizen. Drops for shrines will need to be verified and balanced in the coming days to ensure they aren’t exploitable for any corner of the market.

More roleplay jobs are planned to be added in the future and some have been added miscellaneously. I will be looking for feedback for the current roleplay jobs, either post a comment below or dm me directly and that would be helpful. Like does fishing payout too much, or is the ironball job basically useless, and so on. More variations of roleplay jobs will be added, and I am in the process of training nightemperor going forwards.

Hey ya’ll. Figured I’d post about what work has been done on suburbs in the past 3-4 months of me being manager. So here it is, the first of the quarter-annual Suburbs Update. Getting to Suburbs has never been easier! [2022-09-07_15.11.22] As some of you may know, this time last year - warps were removed. This meant the removal of /warp s, which resulted in it being more difficult to access suburbs square - despite the airport being located directly north of suburbs. Therefore, as a remedy t…

CB Estates
This is a surprise for some of you. How does Hello Hills but with private islands sound? Plots and private islands are going to be auctioned off on the forums! These lovely islands are setup with custom trees, though wild and ready to be tamed, its up to you to turn it into a humble abode. Rules for the district are posted in the auction topic, and a modern style is favored to match the modern theme of Crystal Bay. So what are you waiting for? Start bidding!

Auctions will be posted on the forums shortly after the server goes live. Bug admins to do this if its not been done.

For the month of October, gear up and get ready to hop dimensions for an event unlike any other. Visit the Event Hub or /warp halloween to engage in a number of spooky festivities. Returning is Ultras Trick or Treat, you last saw this favorite event last xmas season. Hidden all throughout the event are 20 candy baskets, and its up to you to find them all to cash in for a huge reward! But hurry up, if you dont catch them all by the 31st, time will run out.

Async Industries is now hiring for its on-site discovery program. We are looking for un-experienced travelers who dont mind facing death behind every corner. Travel into the Backrooms and collect gear throughout randomly spawning chests, but be careful, dying here would be unfortunate, especially if another employee were to take your loot.

But whats that? You have the power of warps and homes, and something called… an Angelic Nightbane? Well you see, things occur differently in the Backrooms. I dont think any of that would be very useful anyways. To become employed with Async, visit their Laboratory in the Event Hub on or after October 14th to learn more.